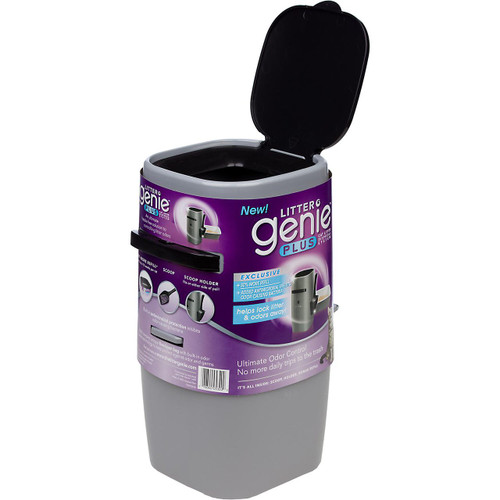 Keep litter box odors in check with be the Litter Genie® Plus Pail. It’s not just a convenient litter disposal system; it’s a nose-friendly, life-improving, happy-dance-inducing little savior for both you and your cat.

Or should they say, lack of smell. The Litter Genie® Plus Pail’s added antimicrobial inhibits odors caused by bacteria on the pail. Plus, the seven-layer refill bags add an extra barrier of stink protection. The pail holds up to two weeks of cat litter (for one cat), so you can kiss those daily trips to the trashcan goodbye.

Litter Genie® Plus Refill cartridges are 18 feet long and last about 10 weeks with one cat, which is 30% longer than the Litter Genie® Standard Refill.

It's that simple! And the less time you spend scooping litter, the more time you’ll have to wave that laser pointer around.

The Litter Genie® Plus Pail fits in your bathroom, under the kitchen sink and in other small spaces. It’s great for apartments and basements, especially when taking out the trash is a real chore. Make less trips now that you have a Litter Genie!